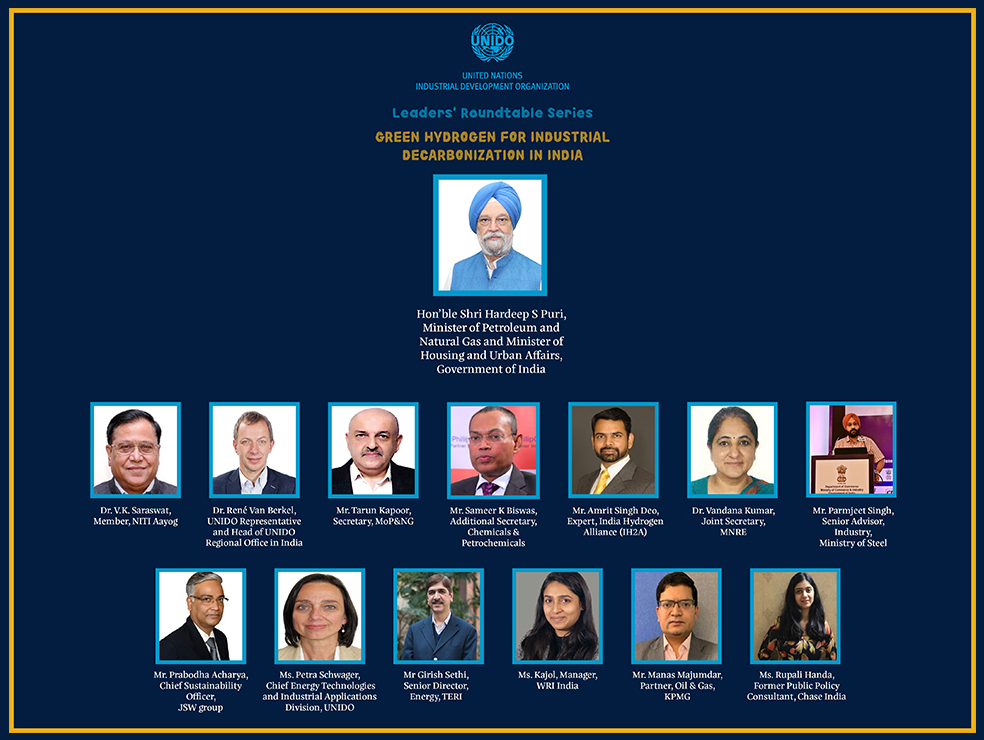 23 November 2021: Touted as the cleanest form of fuel, Green Hydrogen can contribute to a clean, carbon-neutral industry. As of today, all of the hydrogen consumed in India comes from fossil fuels. To explore ways to transform this 'energy matrix,' and deliberate on the opportunities and challenges for manufacturing, supplying and using green hydrogen as an industrial feedstock and fuel in India, a roundtable was organized by the Facility for International Cooperation on Inclusive and Sustainable Industrial Development (FIC-ISID) on 23 November 2021. The Roundtable brought together national and international experts in the sector.

Speaking at the event, Shri Hardeep S. Puri, Minister of Petroleum andNatural Gas andMinister ofHousing and Urban Affairs,Government of India called green hydrogen the "catalyst for India's goal to achieve energy independence by 2047."To maximize its supply and use, he said it was important to activate a virtual cycle of increased supply and demand, regulate Hydrogen market, persevere in research in innovation and collaborate internationally.

Dr. René Van Berkel, UNIDO's Representative for India also underlined what was needed to accelerate the use of green hydrogen in India. He stressed on the need to have a transformative change in the production of hydrogen, generation of renewable energy to power such green hydrogen production, and development and commercialization of technologies for safe and efficient use of hydrogen in new industry and transport applications.

In his Independence Day speech, Prime Minister Narendra Modi had formally announced the National Hydrogen Mission,promising to turn India into a global Green Hydrogen production and export hub. The Mission aims to scale up GreenHydrogen production and utilization, and align India's efforts with global best practices in technology, policy, and regulation

Along with this, the Ministry of Petroleum and Natural Gas has initiated steps to supplement ‎its natural gas business with carbon-free hydrogen fuel. Elaborating on the steps taken by the ministry, Mr. Tarun Kapoor, Secretary, Minister of Petroleum and Natural Gas said, "We're working with the refinery sector to introduce Green Hydrogen in existing Hydrogen applications. Moreover, we're supporting new applications for Green Hydrogen in buses or blending with natural gas using existing piping infrastructure."

Highlighting the steps being taken by the Ministry of Steel, Mr. Parmjeet Singh, Senior Advisor, Industry, Ministry of Steel, said, "Hydrogen is already used in DRI steel route, and can be developed for the main blast furnace route. Green Hydrogen can decarbonize iron and steel making. We need to work on optimizing and scaling up of pilot plants, and make Green Hydrogen competitive."

While the global market for green hydrogen is just beginning to emerge, both Indian public and private sectors are proceeding with demonstration and industrial deployment of projects to build technical capacity and showcase the potential to scale up green hydrogen uptake in energy-intensive, hard-to-abate sectors. One such example is JSW group, a multinational steel making company. Speaking at the event, Mr. Prabodha Acharya, Chief Sustainability Officer of JSW group said, "JSW is committed to ambitious decarbonization targets for its steel, cement and energy businesses that hinge on large-scale and efficient use of green hydrogen. JSW group is looking at integration of renewable power generation and green hydrogen production in these business units. We need market demand for green steel and cement, including through government procurement, to accelerate our transition."